BuzzFeed news reporter Jane Lytvynenko reports someone posted about the death of billionaire and sexual predator Jeffrey Epstein on the Internet message board 4Chan 38 minutes before the information became public. The same person then posted detailed information they claim describes EMS treatment of Epstein after he was found unresponsive in his jail cell Saturday.

At 8:16 a.m. the original post from “Anonymous ID:rPtND1Si” stated: “[D]ont ask me how I know, but Epstein died an hour ago from hanging, cardiac arrest. Screencap this.” That was 38-minutes before ABC News broke the story of Epstein’s death. When there was skepticism on the message board the same person posted the following information: 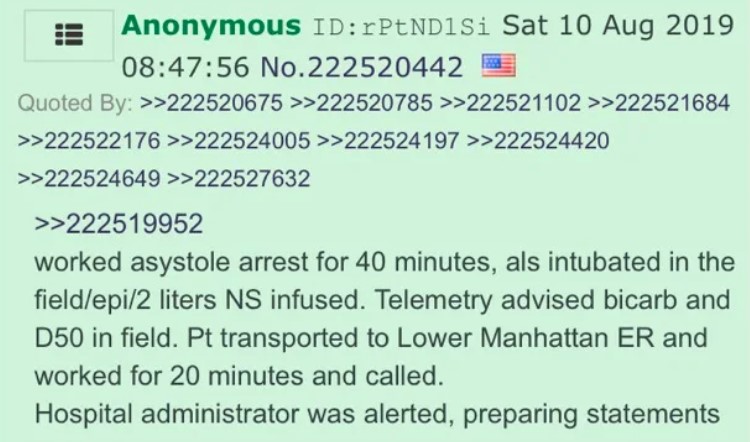 The question, of course, is where did that information come from. Reporter Lytvynenko says FDNY determined that the information did not come from FDNY, but provided no further details. Lytvyenko says other agencies including New York Presbyterian hospital did not respond.

Important to note: While FDNY responded to our inquiry, other agencies did not provide comment. The New York Presbyterian hospital didn’t respond to repeated requests.

The New York City Fire Department looked into whether a first responder posted about Jeffrey Epstein’s death on a notorious internet message board prior to officials announcing it to the public, BuzzFeed News has learned.

Shortly after telling BuzzFeed News the post was “under review,” an FDNY spokesperson said authorities “determined this alleged information did not come from the Fire Department.” The spokesperson did not elaborate on how that determination was made.

Less than 40 minutes before ABC News first reported Epstein’s death on Twitter, someone posted still-unverified details on 4chan, the anonymous message board popular with far-right trolls and white nationalists.