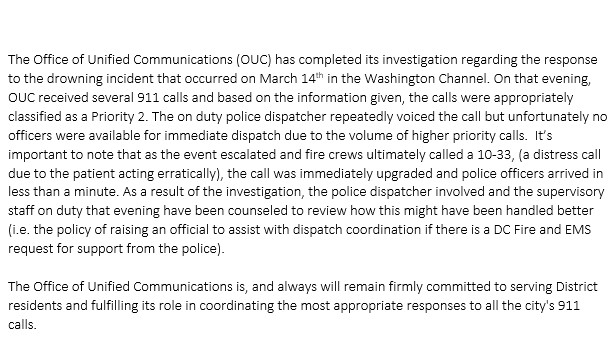 OUC statement on March 25, 2022, eleven days after David Griffin’s deathAfter 11 days, OUC issued a statement (above) about DC 911’s efforts to send police to assist with David Griffin. The statement fails to address the key issues brought up in this STATter911 report. Even though a DC Police Department spokesperson gave on-the-record confirmation that officers were not told the updated address and lost time searching for Griffin and the ambulance crew, the OUC statement fails to mention that dispatchers made that mistake. OUC, in defending its classification of the call, also doesn’t provide details on what the 911 callers said or acknowledge Ambulance 18’s urgent call at 6:33 p.m., nine minutes before the the 10-33 call. In that radio transmission Ambulance 18 made it clear Griffin was out of control, running from them and harming himself. OUC doesn’t explain why the call wasn’t upgraded at that point.

STATter911 has also heard from Aujah Griffin, one of David Griffin’s 10 children. Ms. Griffin wrote this about her father:

He was a devoted father with 17 grandchildren. He loved his family and would have helped anyone in need or in crisis. It saddens me that this unfortunate outcome could have potentially been avoided had he had the help he clearly needed in his final moments. We are still in total shock as the details continue to unfold.

Could DC Police would have saved David Earl Griffin on March 14? We won’t ever know for certain because officers never got the chance to try and stop the 47-year-old man from harming himself. By the time they arrived — almost 30-minutes after the initial 911 call — Griffin had already run from an ambulance crew and jumped into the Washington Channel. When pulled from the water, the Southeast Washington man was dead.

Here’s what we do know. New and official information from a DC Police Department spokesperson confirms previous STATter911 reporting highlighting key DC 911 center actions that delayed police. Those delays occurred despite multiple calls from an ambulance crew and the public of an increasingly violent situation.

The Office of Unified Communications (OUC), where the 911 center is located, is not talking. A spokesperson will only say the agency is investigating how call-takers and dispatchers handled the incident. So far, OUC has not provided details or a timeline of what occurred.

Spokespersons for both DC Police and DC Fire & EMS say the call was created at 6:15 p.m. for an overdose at 4th and N Streets in Southwest. The police spokesperson confirms earlier STATter911 reporting the call was entered as an “overdose” and coded as a “Priority 2” — a non-urgent call. Multiple sources say it’s standard procedure at OUC to classify an overdose as a “Priority 2”. At the time, and for 21 more minutes, there were no DC Police officers available in the First District to handle a new “Priority 2” call. Officers were busy on more urgent calls or previously dispatched “Priority 2” runs. It was also shift change which can tie up officers. First District officers are among those working 12-hour shifts due to the demonstrations by truckers. The shift changes are at 6:00 p.m. and 6:00 a.m.

When police were finally dispatched at 6:36 p.m. the call was still in the dispatch center computer as a “Priority 2 overdose.” Sources say that despite the urgent call from Ambulance 18 at 6:33 p.m. (above) that Griffin was harming himself and likely on PCP, the call remained a “Priority 2.” The harming himself included Griffin banging his head against a wall. But DC 911 knew 18-minutes before the desperate situation described by the ambulance crew that this was more than just an overdose. Our sources say during the initial 911 calls at 6:15 p.m. call-takers were told that Griffin was yelling and jumping on cars at 4th and N. As many as ten 911 calls were received describing Griffin’s actions.

Cops not told about new location

Even after DC Police were dispatched OUC failed to give the officers important new information. The DC Police spokesperson confirms that officers were never told by radio that Griffin and the ambulance crew were no longer at 4th and N. At 6:38 p.m., Ambulance 18 reported Griffin was on the move, and they were now at least two blocks away on P Street. Even at 6:42 p.m. when Ambulance 18 called a 10-33 — meaning they faced imminent danger — officers weren’t told by a dispatcher that everyone was on P Street. Without being told by radio, the only way officers would have known this information is if they scrolled through extensive dispatch notes on the mobile terminals in their vehicles. The police spokesperson confirms officers lost time talking with citizens trying to find Griffin and the Ambulance 18 crew.

There was a slightly faster response from the DC Police Harbor Patrol. The P Street location is just south of the Southwest Waterfront dock shared by Harbor Patrol and the fireboats. A firefighter assigned to the fireboat witnessed the ambulance crew struggling with Griffin and can be heard on the radio quickly notifying his police counterparts. Moments later, the firefighter saw Griffin jump into the Washington Channel. Despite their quick water rescue response David Griffin didn’t survive. The Office of the Chief Medical Examiner has not yet determined a cause of death.

Frustration in the field

DC officers familiar with this incident say OUC’s failures with this call impact everyone’s safety — the public, the ambulance crew and David Griffin’s. Failing to relay key information also can impact the safety of police officers.

Fire and EMS crews have long expressed frustration with OUC over the inability to get a timely response from DC Police, particularly in potentially life-threatening situations. Not specific to this incident, STATter911 has talked with numerous fire officers in recent years who believe they’re often dispatched on what should be police responses because no police officers are available. If DC Fire & EMS crews dare to ask OUC for the estimated time of arrival of police they’re often greeted with the decades-old standard response, “MPD doesn’t give ETAs.”